When a Business Experiences Contractual Issues 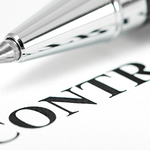 It would be wonderful if the business world were free of contract disputes, as a contract lawyer Ridgefield CT trusts can attest. Unfortunately, this is not the case. It is quite common for businesses to enter into a contract only to have one of the parties in breach. When a company is in breach of contract, serious problems could result. Let Legal Sweeney help you remedy the situation. We have many years of working with helping businesses like yours settle business disputes.

What is a Breach of Contract?

When a person or business does not complete their obligations, the other party may be able to take legal action. It will be important to speak with a contract lawyer Ridgefield CT relies on at Legal Sweeney so that we can help you navigate the complexities of contract law.

Proving a Breach of Contract

When one party has broken a contractual agreement, they may be entitled to collect damages in some way for the breach. When one party breaks a contract they had initially agreed to, legal action with the help of a contract lawyer Ridgefield CT may be necessary. One party may choose to seek damages for any losses they may have incurred as a result of the contract being broken. Damages are often in the form of money and are awarded to the party who suffered financial loss as a result of a breach of contract. Damages come in several forms, for example:

In certain instances, you can also get the other party to perform their obligations under the contract, called specific performance.

As a business owner, you will want to resolve any contract issues you may be having as quickly as possible so that you can get on with your day-to-day business dealings. Call the attorneys of Legal Sweeney today. Let a contract lawyer Ridgefield CT can turn to manage the conflict and negotiate with the other party’s attorneys. We are confident that we can help bring a speedy and just resolution to your contractual issues.

A breach of contract lawyer can help right the wrongs that your company might experience in Ridgefield, CT.

Contract breaches are very difficult for individuals and small business. Unfortunately, they normally waste time and money. A contract lawyer at Sweeney Legal in Ridgefield, CT knows how frustrating and expensive contract breaches can be for business owners. Our professionals have extensive knowledge of contract breaches and can work with you to help rectify your situation.

There are four types of contract breaches that a Ridgefield, CT contract lawyer can help you resolve:

"John has handled multiple business issues for me with great results. He also wrote Wills for my friends. In addition to being a good lawyer and knowledgeable businessman, John cares about people and is compassionate and empathetic. He is fast, efficient, and reasonably priced. I'd recommend him for any Estate, Will, Elder or business issue."
Dina M.