The most common federal tax crime is tax evasion, which is a failure to report taxes, reporting taxes inaccurately, or failing to pay taxes.

Taxes are a big part of our life and we need to be careful not to run afoul of the law.  The laws get so crazy that you can be convicted of tax evasion in a year in which you were actually due a refund. 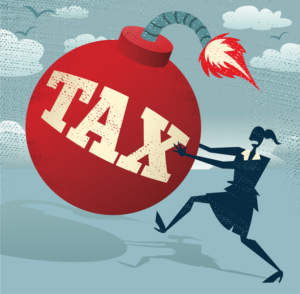 Tax Evasion in CT and NY

To establish a case for tax evasion, the government must prove the elements beyond a reasonable doubt.  They are 1. that the taxpayer attempted to evade or defeat a tax or payment of a tax; 2. an additional tax was due and owing; and 3. the taxpayer acted willfully.

The penalties are pretty stiff, the crime is a felony, and can get you significant jail time. Remember Al Capone who spent 11 years in jail for taxes.

The law can apply to an individual taxpayer, as well as the taxpayer’s tax preparer, accountant, bookkeeper, spouse,or lawyer.   It also applies to a corporate officer who attempts to evade their corporation’s corporate tax, or the administrator of an estate who attempts to evade the estate’s tax. Under the law person other than the taxpayer can also be prosecuted for tax evasion, even if the person only aided and abetted the taxpayer in the evasion.

The law talks about “any tax,” which means that tax evasion is not limited to income tax, but can include other forms of tax, including estate tax, excise tax, or employment taxes.

In most cases, the evasion follows a similar pattern.  1. understatements of income; 2. improper deductions; 3. improper allocations of income; or 4 incorrect claims of credit or exemption.

Sometimes the government can look for unexplained increases in the taxpayer’s net worth or payments which are not reflected on the taxpayer’s tax return. They often look to bank deposits for evidence of income the taxpayer never reported.

It is critically important for anyone who may potentially be facing charges of tax crimes to seek the counsel of an experienced tax attorney before talking to the authorities.