U.S. Citizens and permanent residents (green card holders) living outside the U.S.may not be aware of their U.S. tax obligations. The rules for filing income, estate and gift tax returns and for paying estimated tax are the same as if you lived and worked in the US even if you do not live or work in the U.S.

Bottom line, Citizens and permanent residents of the US are taxed on their worldwide income even if they never step foot in the US and don’t earn any income there.  The income is reportable even if they did not receive a form W-2 or Form 1099.  The law requires you file a tax return.  You would have to consider the state tax consequences also and Connecticut and New York have complex laws.

You May not Owe Tax

The way the system works is that you will have to pay taxes in the country where you are working.  You then need to report the same income in the US on a US tax return (keeping those tax preparers in business).  You may or may not owe tax depending upon a tax treaty, the earned income exclusion or the ability to credit the taxes paid to the foreign government against the US income tax. 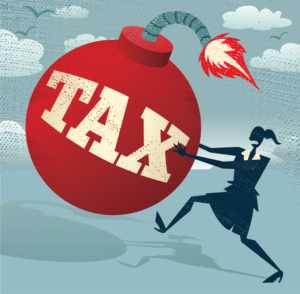 The failure to file the US return is a crime, there is no statute of limitations (they can come after you at any time), and the penalties and interest are large.

Increased Risk of Being Caught

Unfortunately, there is increased attention by the US government on its overseas citizens.  What you got away with before, is not likely to continue in the future.   Lately there has been a fair amount of hoopla with the introduction of the Foreign Accounts Tax Compliance Act (FATCA), which targets tax non-compliance by US taxpayers with foreign accounts.  In addition,  there are a whole host of disclosure agreements with the industrialized nations and the US which are going to make it a lot easier for the IRS to find foreign income.

The IRS has announced new streamlined filing compliance procedures for non-resident U.S. taxpayers non-filers in an attempt to get them to come in voluntarily.The IRS says, “These procedures are being implemented in recognition that some   U.S. taxpayers living abroad have failed to timely file U.S. federal income tax returns or Reports of Foreign Bank and Financial Accounts (FBARs), Form TD F 90-22.1, but have recently become aware of their filing obligations and now seek to come into compliance with the law.

These new procedures are for non-residents including, but not limited to, dual citizens who have not filed U.S. income tax and information returns.”There are limitations for this program and to qualify you must:

• Be a non-resident U.S. taxpayer

• Have not filed a U.S. tax return during the same period and

So, to sum it up, if you haven’t filed your tax returns, living overseas does not provide relief from your obligations. Given the increased efforts on the part of the U.S. government to discover delinquent U.S. taxpayers worldwide and the increased pressures on foreign governments and financial institutions imposed by FATCA, it is in your best interest to use the voluntary compliance procedure before the IRS discovers your delinquency.

“John Sweeney is efficient, fast, and a great writer. He gets things done in a timely manner.”
Alexandros G.